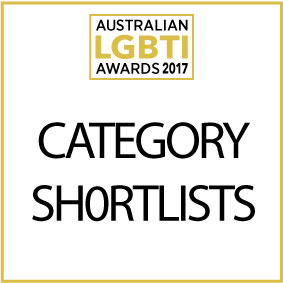 The LGBTI Awards have been brought to Australia by the co-founder of the British LGBT Awards, known as the British Gay Oscars!

The aim of the Awards is to help Australia effect change on LGBTI Equality Laws, which currently lag behind many other developed nations when it comes to these key areas of human rights.

The awards will be showcasing and celebrating the best Australian LGBTI talent both in the celebrity world and the corporate world with a diverse range of categories.

So now that voting ended on December 31 2016 this is just a follow up and “Thank You” to everyone that has voted, I’m so very grateful of your support.

For those who don’t know I have been shortlisted for ‘MTV – LGBTI Broadcaster & Presenter of the year.‘

It is such an honour to be acknowledged not just for my own hard work but to represent other trans folk here in Australia.

The event is organised by Linda Riley of the Global Diversity Company and Silke Bader of lesbian magazine LOTL.

Keep your fingers crossed for March!

Michelle's powerful combination of self and community shines through the platform of radio which has helped raised the public profile and national dialogue of transgender, gender diverse and intersex issues on a national scale. Surprisingly nothing is off limits with Michelle who connects with her audience brilliantly; obviously through her humor and unapologetic blunt honesty. She is often labelled as an inspiring advocate and role model for youth and adults alike and hers is a powerful story to tell. We know that when a woman has the support of her community, especially her sisters, she is unstoppable. Michelle’s wider support from the women around her, LGBTI+ or ally alike, has helped develop her own unstoppable resilience and body positive confidence that she inspires others with. Now a sought-after public speaker Michelle is admired for her bold public representation of the Transgender community as works to break through the barriers of unconscious bias, cultural and structural issues to ensure equality of opportunity for all Australian work spaces. Winner of the ANZ Excellence in Business Award, ‘LGBTI Jobs’ a relatively new project, they pair LGBTI graduates and jobseekers to companies that embrace inclusion initiatives. “We’ve started a business that helps anybody who’s in the LGBTI Community. We go to companies and see what they are you doing. This isn’t just for me, this is for the entire community and we are going to make a massive change.” Michelle was recently celebrated alongside some truly amazing individuals from our community as part of the ‘The LOTL Power List 2016’ as someone who does everything in their power to make life that little bit better for the lesbian, gay, bisexual, transgender and intersex communities: sometimes with blood, sweat and tears; and sometimes just by being themselves. Michelle is also a finalist for ‘MTV – LGBTI Broadcaster and Presenter’ in the Australian LGBTI Awards 2017. Awards Globe Awards 2016 - ANZ Excellence in Business Award The LOTL Power List 2016 (28/40) Finalist for ‘MTV – LGBTI Broadcaster and Presenter’ in the Australian LGBTI Awards 2017 View all posts by mishsheppard