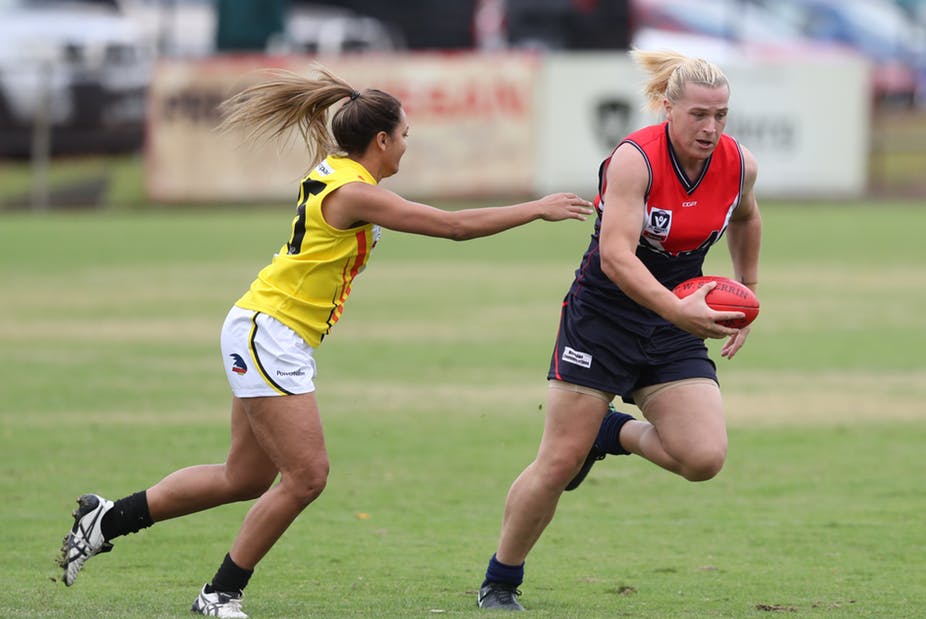 The inclusion of transgender athletes in Australian sports leagues is an issue that sporting bodies are only just coming to terms with.

In recent months, the Australian Human Rights Commission, in partnership with Sport Australia, has been working on national gender diversity guidelines, with sporting bodies awaiting their recommendations.

However, the Australian Football League (AFL), has recently announced its own Gender Diversity Policy, which is limited to transgender and non-binary athletes (but doesn’t include intersex athletes). Since its release, the policy has prompted many questions about why the AFL proposed it and how it envisages implementing the new rules.

Lack of consistency across sports

Guidelines for trans and gender diverse (TGD) athletes have existed in international sporting bodies for years. The International Olympic Committee, for instance, has allowed TGD athletes to compete since 2003. In 2015, it decided that sex reassignment surgery would no longer be required and halved the transition period prior to athletic competition to 12 months.

Other elite-level sporting bodies also have transgender protocols in place, most of which allow male-to-female athletes to compete in sports, either on the basis of sex-reassignment surgery or hormone-based transition. Female-to-male athletes face fewer constraints, as it is assumed they have no potential for competitive advantage.

Australia has lagged behind when it comes to accommodating TGD athletes. The impetus for change came last year when a transgender footballer, Hannah Mouncey, applied for entry into the AFL Women’s League (AFLW) draft and was denied.

Mouncey, a former elite-level men’s handball player, was ruled ineligible according to Section 72(1) of the 2010 Victorian Equal Opportunity Act, which provides an exemption for excluding athletes from sporting activities if their “strength, stamina or physique” is relevant.

According to the Victorian Equal Opportunity and Human Rights Commission:

The purpose of this exception is to ensure players do not have an unfair competitive advantage in single-sex competitions.

Surprisingly, Mouncey was permitted to keep playing at lower levels of competition. In fact, transgender, non-binary and intersex athletes have long been included in community-level AFL with little fuss. In Sydney, for example, the Newtown Breakaways AFL club has provided a welcoming environment for gender diverse women.

But the AFL’s decision seemed contradictory, as well. Mouncey was deemed “likely” to have an athletic advantage over other female athletes, but that only mattered in an elite competition involving remuneration.

Because the AFL’s policy claims to meet the “strength, stamina or physique” exemption under the VEOA, it is incumbent on the league to produce corroborating evidence.

According to the policy, a baseline requirement for AFLW athletes is that they demonstrate a level of testosterone below five nanomoles (nmols) over the previous 24 months.

It is unclear how the AFL arrived at these specifications. Most likely, the league drew on the IOC’s policy, which currently limits female athletes to 10 nanomoles of testosterone over the past 12 months, and is set to lower that to five nanomoles by the 2020 Tokyo Olympics.

The IOC’s policy has been framed on the basis of medical and scientific opinion within the organisation, rather than substantive research. This is part of a wider problem: there is no recognised body of scholarship about the performance characteristics of TGD athletes. There is apprehension within sport that they may have advantages over cis-gender athletes, but this has not been properly measured or validated.

Another problem with the AFL’s new policy is that the burden of proof is also left to athletes. In addition to the testosterone testing, the league mandates two years of physical and performance data, including:

The AFL acknowledges these data may not have been collected by all transgender athletes over the past 24 months.

Yet, paradoxically, the league also claims these data provide a robust measure of evaluating transgender athletes, and that comparisons with cis-gender athletes over a two-year period are entirely feasible.

A more scientific approach would be a prospective study, funded by the AFL (with independent researchers), which could also provide new research on the subject.

Steps toward a possible solution

In mid-August, the AFL invited athletes and advocates from the transgender community to a discussion about its proposed Gender Diversity Policy. Michelle Sheppard, a workplace diversity consultant (and transgender woman), facilitated the session. She later wroteenthusiastically that:

…the policy presented was an early draft and needs much work still but the feedback we gave was well received by the AFL’s representatives.

So Sheppard was surprised that the final version of the policy was released two weeks later, seemingly unchanged.

Last week, Sheppard met with the AFL one-on-one to ask questions. She had received feedback from some transgender athletes that they simply did not have the athletic performance data the AFL was seeking for the past 24 months, and feared being left out.

Read more: Explainer: the difference between being transgender and doing drag

Sheppard said she was assured by the AFL that it would accept less data from athletes without 24 months of record-keeping – a sign the league wants to find solutions rather than stymie applicants with hurdles.

However, according to Dale Sheridan, a lawyer and transgender woman, ongoing surveillance of transgender athletes in the AFLW is likely to stoke anxieties. In an email to me she asserted:

The AFL can review a decision at any time, which provides no certainty for TGD trans players if … they are deemed ‘too good’. How can one take the field and give their best with the threat of a decision review constantly hanging over their head?

Sheppard told me she is keen to liaise with the AFL on the policy, but the league’s decision makers will need to be receptive to input from those with lived experience of transitioning, as well as endocrinologists who specialise in transgender health.

After all, she says, the AFLW impacts how the public see transgender people. The Gender Diversity Policy says that discrimination will not be tolerated and that the intention is to support gender diverse players in a safe and inclusive environment.

But the focus on ongoing surveillance and testing may result in some being made to feel they are infringing – unfairly – on cis-gender space.